The doors slide in j-channel and are framed in roof angle which is flattened and pop-riveted. They are anchored with small hasps and clips (not finished in this image).  All hardware cloth is attached with fencing staples for a very secure animal proof cage. There is a divider in the center of the double cage to separate the flock. I am going to use one side for a brooder shortly when I start breeding for meat. I plan on lining all but the door with a radiant barrier and installing heat lamps. With South Louisiana weather I should have no problem growing the birds in these cages. 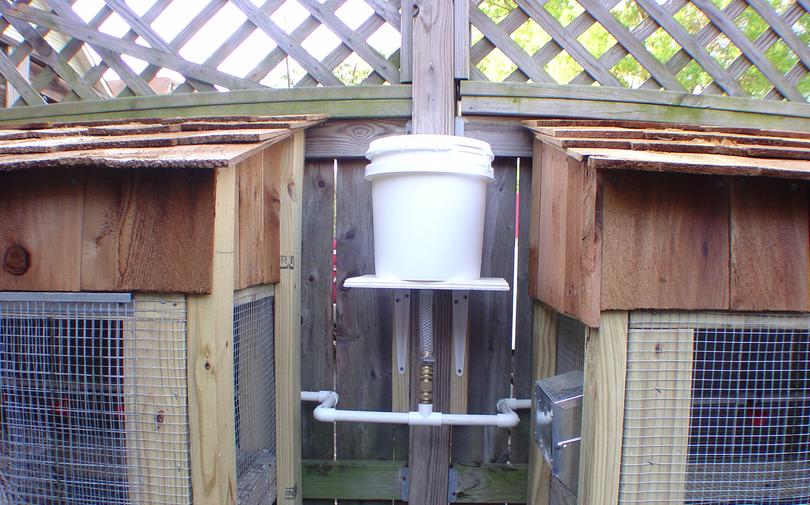 Water is most critical initially. Make each chick drink a few times before introducing food to avoid the dreaded "pasty-butt". I used a standard water bottle with a quail tray. I set it on the cage floor to start  and gradually raised it on a string and hook as they grew. I used a shallow tray for food initially (one of the bottoms of the quail watering systems). I also made little "piles" of food which they took to immediately. The food can be powderized at first to make it easier to eat. I used a coffee grinder to powder the crumbles. You could use a mortar and pestle or similar way to grind to a powder.  You can skip this step, however, and just feed them crumbles right off. After a few days I used a standard feeder. At four weeks I have them drinking out of the automatic watering cups and eating crumbles out of an adult feeder. The chicks above are 3 days old. They are super tiny but can run "really"fast. I didn't have a single chick have any deformations or problems and are still doing fine after four weeks. At six weeks I separated the females from the majority of the males. I ended up with eight females that I know of. Two birds, one Mandarin and another fawn, I do not know the sex at this time.  I put them along with one male in the cage with the known females. The other five males I left in the original cage and will process them in a few weeks. Once this new breeding group is producing eggs I will process the original group for meat. 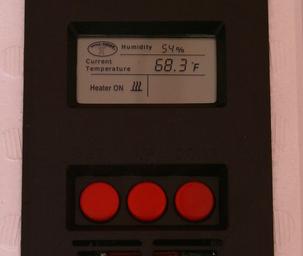 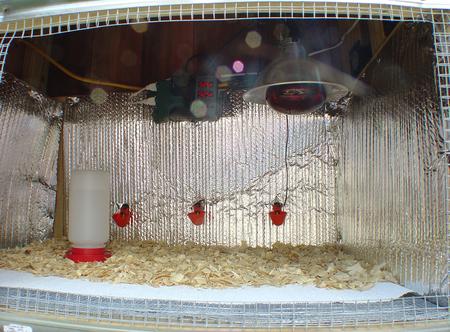 ​Breeding quail requires the birds be around eight weeks old for full maturity of both sexes. You can collect eggs up to seven days before incubating but many suggest five days as the cut-off. The eggs must be "turned" 2-3 times per day once you start collecting them. After seven days the incubator must be started. The temperature should be set between 98-102 degrees Fahrenheit with the optimum being 100. The humidity should be between 25-60%. If these settings are not maintained the hatching may be slow and result in diseased or damaged chicks. After 14 days the eggs must not be turned anymore. Remove the turner from the incubator and raise the humidity to around 70%. Keep the lid closed in this period while the chicks are hatching. They should all be hatched within three days. Let the chicks stay in the incubator for no more than 24 hours as they will need water and food after that. I chose the Little Giant forced air incubator with the quail egg turner. It features a digital temperature and humidity display and 1/4 inch screen for chicks to walk on. 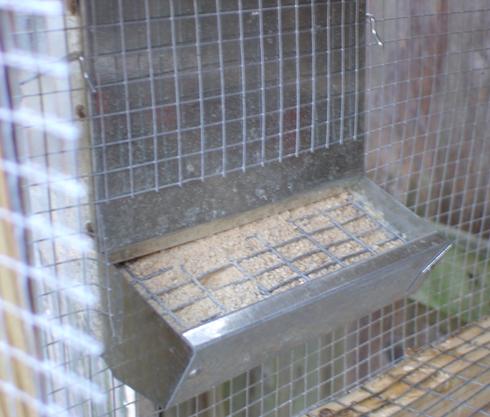 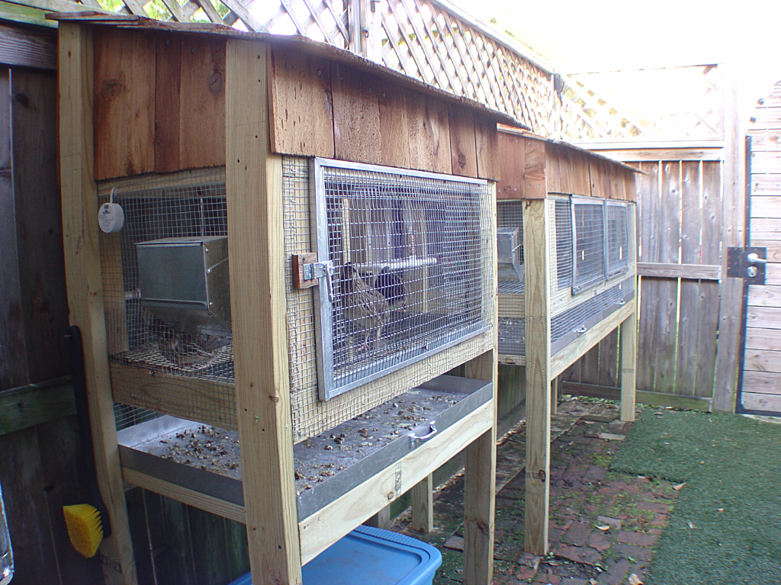 Above shows the new alterations to the watering system. I added ball valves to isolate each cage and unions to disconnect them if I need to move/repair them. This system has been working flawlessly since installed. With the number of birds I have it easily lasts one week.

Below, I added more boys to my collection. I am trying to improve diversity in the breeding process. I now have browns, Italians Mandarins , and Lavender quail. Some are tuxedos within their variety. 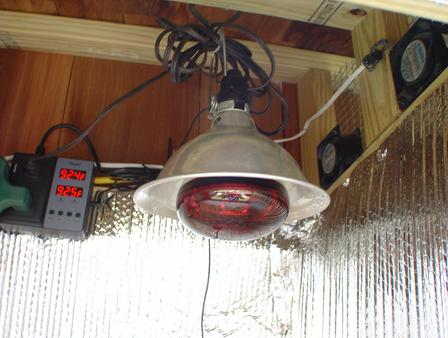 ​Transfer the fluffy, dry chicks to the brooder when ready. I chose to modify an existing cage to use as a brooder because I don't have room to put them somewhere else. I lined the walls with radiant barrier to help optimize the environment for the chick requirements.  The temperature in the brooder should be set at 95 F in the summer and 100 F in the winter. You can drop the temperature by five degrees each week thereafter. Many people use pine chip bedding used for rabbits and other animals. This helps keep them warm and builds leg strength. I used a thermostat to control a heat lamp and fans to keep the temperature in range. I also used that puffy shelf paper under the chips to give added traction for the chicks.

The feeders are standard 7.5 inch  rabbit feeders which I modified by wedging a piece of 1/2 by 1 inch hardware cloth over the opening. This prevents the birds from pulling, pushing  or dust bathing the food out. The bigger the piece of wire you can fit in there is better. The first one I installed they completely removed and kicked out all the food. I have to reach in occasionally and pull up the wire so it's wedged tight. Other than that it works great. I only have to add food every three days and water once a week. That may change when it gets hotter. I might install a larger water bucket later as the flock and temperature increases. 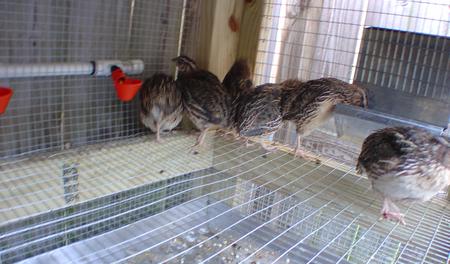 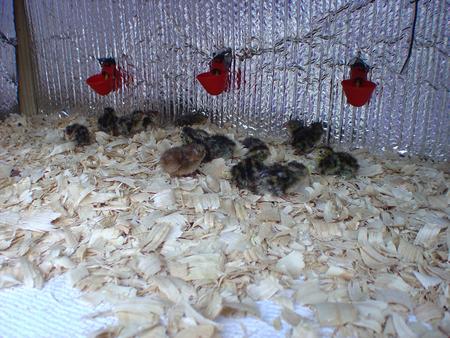 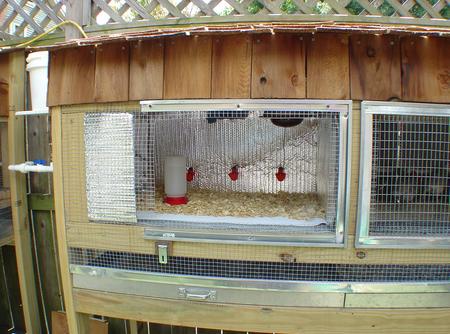 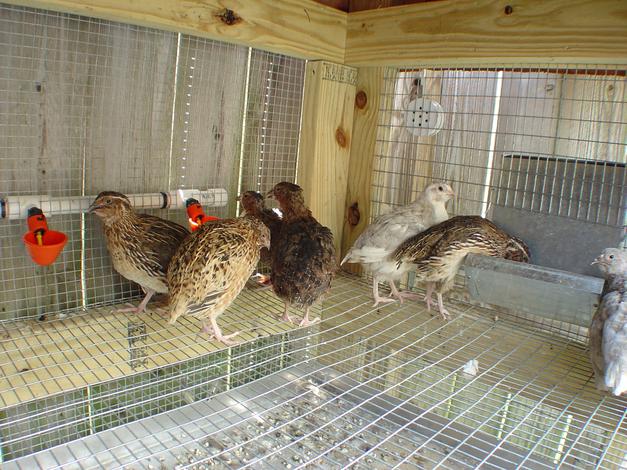 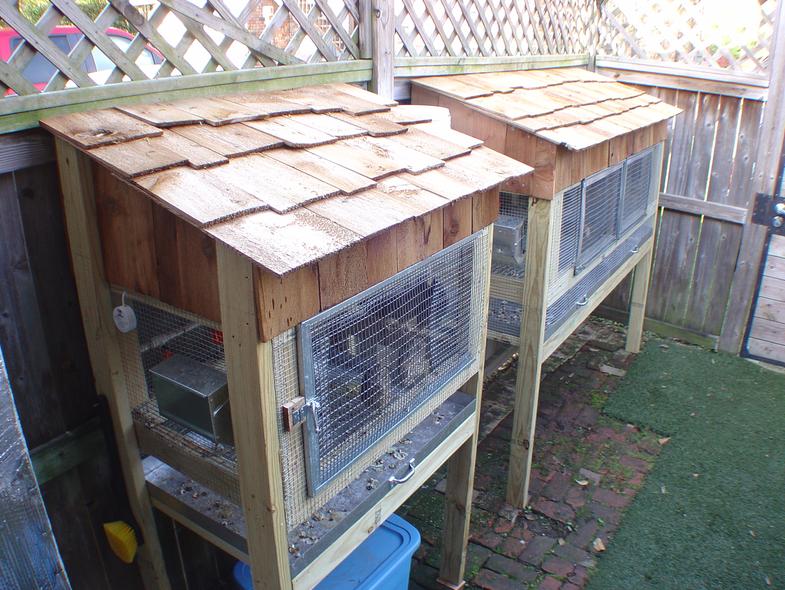 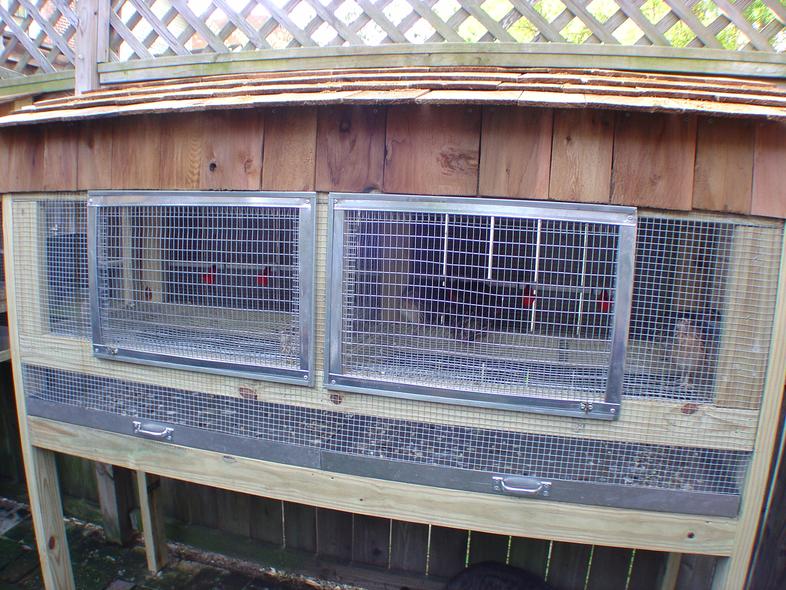 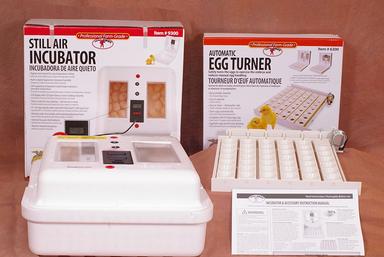 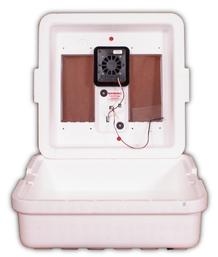 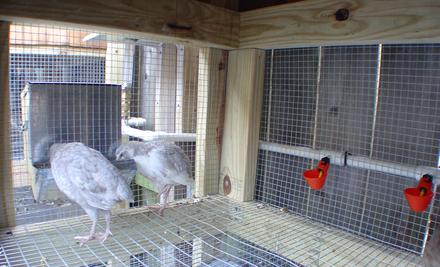 I chose a gravity feed watering system.  The bucket is a two gallon frosting bucket. It features a quick disconnect so the bucket can be removed and cleaned. I plan on installing ball valves and threaded unions for each cage so they can be separated from the system individually. The 1/2 inch pvc pipe leads to standard orange drinking cups in each cage.

The cages are of my own design after looking at several different ones on the internet. I built them to fit in the space as efficiently as possible. They are treated 2x4 frames with 1/2 by 1/2 inch hardware cloth on four sides. The floor as well as the doors are 1/2 by 1 inch hardware cloth. this is to provide sturdiness and easier dropping passage. Galvanized, 18 gauge steel trays collect droppings  and easily slide out and in for cleaning.  Floor size is 2 x 3 feet. The height varies from 24  to 28 inches. The birds never hit their heads on these cages even though they occasionally fly above the hardware cloth area.

I am continuing my urban farming experience by raising Coturnix quail on my patio. Since half of my 10 x 16 foot patio is taken up  with my aquaponics setup, I had to come up with something that can be raised in a small space. Coturnix quail mature faster, produce more eggs, need less food and space than chickens or any other type of poultry. They are known as Japanese quail or Coturnix japonica  which is also synonymous with Pharaoh quail or eastern common quail. It is a breed that has been around since the 11th century but only recognized as it's own species since 1989. Traditional wild populations are found in East Asia and Russia which also includes India, Korea, Japan, and China. Since their spread and cultivation for hundreds of years they are also found in Africa, Europe, and other regions. They are a ground dwelling species which take cover in dense grass or vegetation to avoid predators. They are also associated with a water source nearby. Quail eat mostly seeds, berries, fruits and insects, foraging along the ground under the grasses and brush. They can lay up to 300 eggs per year and mature very quickly to 5-6 ounces. Full maturity is achieved after 8-9 weeks but they may be laying by 6 weeks. The primary breeding season is the summer but they can reproduce year round if conditions are ideal. Life expectancy is 2 to 2.5 years. Incubation of the eggs is 14-17 days. The temperature is kept at 100 degrees Fahrenheit and the humidity at 40-50%. The eggs must be turned three times per day until day 14. If using an automatic turner it must be turned off and removed at 14 days. The humidity is increased to 60% and the unit is kept sealed. Note when the first chick has hatched as it needs to have water and food after 24 hours. If chicks are still hatching after 24 hours since the first hatching you need to quickly remove all the hatched fluffy chicks.  Minimize the temperature and humidity shock when removing ready chicks. Place them directly into a brooder set at the proper temperature.
My flock is primarily jumbo brown quail which is slightly bigger than some other breeds. Coturnix quail come in several colors such as, gold, range, fawn, white, tuxedo, Cream, Grey, Blue, Grey/Blue, Ginger, and Red. I have two grey/blue birds which some are calling lavender. One of these is a tuxedo and I do not know the sex of either right now (waiting for them to either crow or lay eggs). The United States has some recognized breeds such as, Texas A&M, English white, golden range, red range, Italian, Manchurian, Tibetan, rosetta, scarlett, roux dilute and golden tuxedo. While color varies a lot the bird body and egg size are generally consistent. Although they are classified as game birds which makes them a gourmet delicacy, no license is required to raise them.